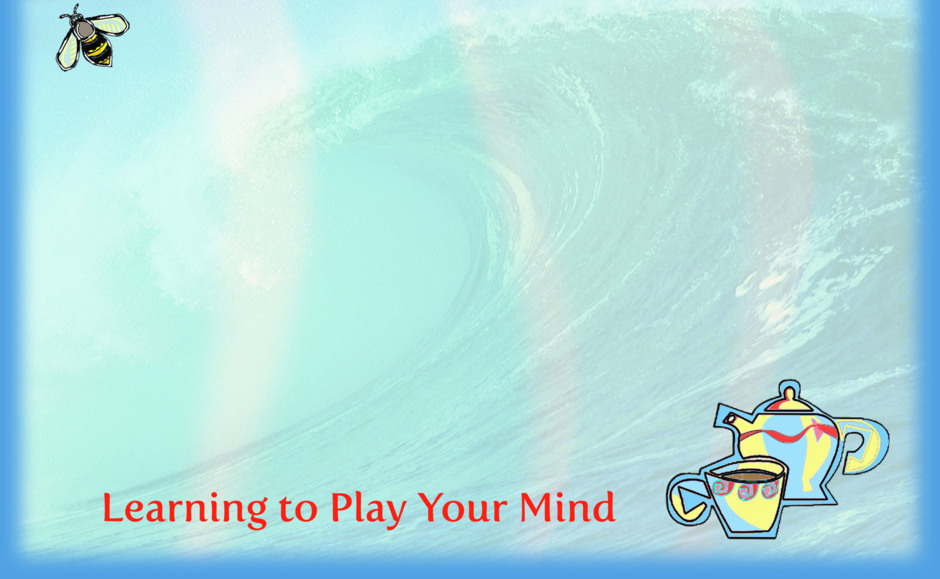 1.You may be struggling with a particular problem, like depression, panic or OCD, or simply want to find out more about who you really are; either way, a combination of CBT and mindfulness will likely help you in the right direction. Use the form under contact to get in touch and make an appointment;

2. You fancy feeling more connected, particularly through the body, in which case you might like chi gong in the (Stoneham) park, which happens every Friday morning at 9.30am;

3. Interested in Zen? Our group is part of the Wild Goose Zen Sangha, and we meet every Tuesday evening on Skype.  Let me know your Skype i.d. and we can get started.

I am here to help you learn to play your mind...

Check the news section of this website to find out what's coming up! 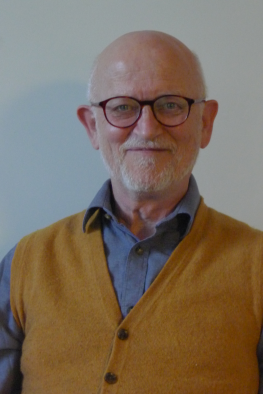 Learn more about what I do

I work as a Cognitive Behavioural Therapist, trained on the Oxford Diploma course of 1997, and accredited by the British Association of Behavioural and Cognitive Psychotherapies (www.babcp.com) in 2000, and subsequently reaccredited.  But I was not content simply  to rest there... having always been interested in the overlap between the therapeutic and the spiritual, it is no surprise that I was drawn to the mindfulness side of things.  Especially since I'd been a student of Zen since the early 1980s... and before that a sannyasin in Poona.  I also had six months of my own psychotherapy ('Primal Integration') with John Rowan in the 1980s.  Before I trained as a therapist, I had six years working in an Oxfordshire Mind day centre called Acorn, where I learned about mental health issues on the ground, so to speak, as well as developing a love of groupwork.

So although CBT provides the skeleton for what I do, much of the flesh comes from Zen, mindfulness, Qi Gong (I learned the rudiments of Shaolin Qi Gong from Master Mao Shih An in 1996), the Big Mind process (www.bigmind.org), and other experiential techniques.  According to what you need and what you like - I retain the ideal (from CBT) of collaborative empiricism - we work together on your problems and try stuff out.

After Oxfordshire Mind, I went to the Priory Hospital North London, learning hugely - especially about OCD and BDD - from Rob Willson, whom I succeeded as CBT Co-ordinator, before transferring down to Priory Hove.  I also worked for some time with my friend Jem Mills' company Aurora CBT.  From 1999 to 2020 I ran (and later supervised) Mindfulness Based Stress Reduction (MBSR) courses, but have now paused this, in favour of spending more time and energy in Zen training.  I have been a Zen student since the early 1980s, initially being encouraged in that direction by my then Aikido teacher Kanetsuka Sensei, and subsequently receiving jukai (the precepts) from Genpo Roshi in 1988.  He ordained me as a Zen monk (shukke tokudo) in 2010.  With his encouragement, I took the Medicine Wheel (a shamanic training) with the Shuh Shuh Guh (www.shuhshuhguh.com) in 2011/12.

From 2014-2019 I was a Senior Lecturer in CBT at the Salomon's Institute for Applied Psychology (part of Canterbury Christ Church University), and co-wrote and introduced the Making Friends With Your Mind module, which combined the MBSR syllabus with self-practice of CBT, to increase the experiential aspect of the Diploma course.

In 2016 my then Zen teacher, Patrick Kundo Eastman Roshi, invited me to train as a Zen teacher (to my utter astonishment), a process that continued under my current teacher, Jeremy Ryokan Sensei.

On 18th October 2020, I had the honour and delight to receive Dharma Transmission from him, receiving the name Shinkai (Ocean of Fidelity) and am now an authorised Sensei (Zen teacher) in the Wild Goose Zen Sangha, part of the White Plum Asanga founded by Taizan Maezumi Roshi. Some pictures, taken by Roy Webster, just after the ceremony, which happened at the Meeting House on the University of Sussex campus at Falmer, appear below: 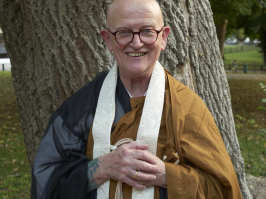 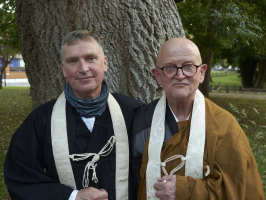 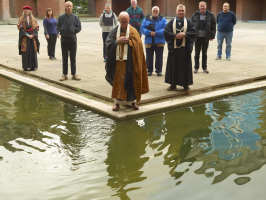 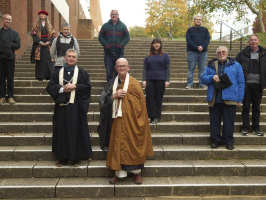 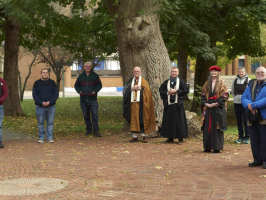 What I have learned is this:

In essence, we are human beings with a particular set of talents and difficulties.  The way we see things is affected by all kinds of conditioning and other programmes we have taken on board.  If we can accept that we are not our programming, we can begin to extricate ourselves from it and begin to find out - and act according to - who we really are.  What I call Inclusive CBT is therefore not just about symptom reduction (useful though that is!), but also about learning to live in ways that enable you to celebrate the individual wave of your life, without forgetting that you are part of the undivided ocean.

You can reach us on: